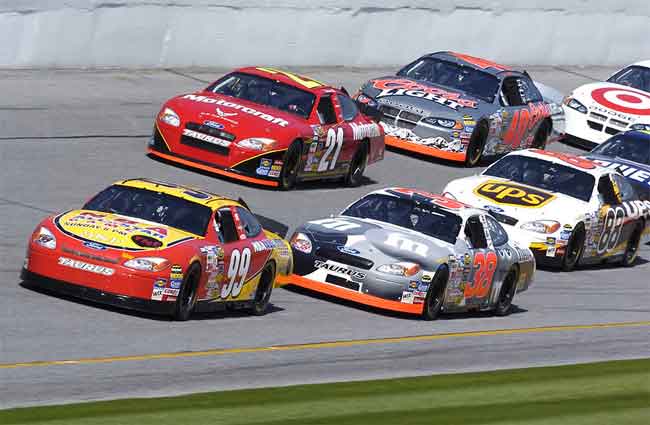 For years now Hendrick Motorsports has always been one of the top dog’s in NASCAR with Jeff Gordon who has won 4 Nextel Cup Championships in his career and Jimmie Johnson who just won his first with his dominating season in 2006. People are already starting to voice their hate even more Hendrick Motorsports this year since they have taken the first 5 races out of 6 using the new Car of Tomorrow and Jeff Gordon has also won a few non – Car of Tomorrow races at Talladega and Pocono.

Dale Jr fans seemed to show even more of their immature side by tossing beer cans and other trash onto the track once Jeff Gordon has tied Dale Earnhardt with wins and then at Talladega once he passed him in wins. I can understand their frustration but you have to draw a line somewhere. Jeff Gordon has always been one of the most hated drivers in NASCAR and most of this hate comes from the Earnhardt fans. Even when Gordon payed tribute to Earnhardt, fans were still upset with it and I don’t agree with that. With Dale Jr’s recent decision to drive for Rick Hendrick next year, you could almost say that Hendrick Motorsports is starting to remind you a bit of the Yankee’s from the past few years.

Most people are familiar with the New York Yankees and the fact they have such a massive budget, they can just go out and buy any player they want to play for them. Just some of the names they have in New York would instantly say “World Series Champs” every year but thankfully that isn’t the case. With the likes of Derek Jeter, A-Rod, Jorge Posada, Jason Giambi, Roger Clemens, Mariano Rivera and more, you could argue that the Yankees are one of the best teams in baseball despite their very rough start to the 2007 season.

How does this tie into NASCAR? Well if you look at Hendrick Motorsports roster now, you could also say you would expect a Hendrick Motorsport driver to win the Nextel Cup every year now since their roster would appear to be so dominate. Not only do you have the likes of Jeff Gordon and Jimmie Johnson but you also have Casey Mears that has had a lot of success and may be another uprising star with Hendricks and of course you know that Dale Jr will definitely be a top contender every week now. You know he can be successful, as long as he has the right equipment. Obviously Hendricks has all the right equipment since they field 4 very competitive teams every weekend, find more.

Many fans of NASCAR are already voicing their much disapproved thoughts on the whole Dale Jr move and some feel that NASCAR now will be nothing but a Hendrick domination every week and I completely disagree with that. I mean sure, they will have an awesome team next year but things will go wrong from week to week that involve: mechanical failures, wrecks, getting caught up in other people’s wrecks, and the fact there are other teams out there that can just be as competitive as Hendrick’s is.

Also don’t forget that half of Hendrick wins this year have come because of some pure luck in some cases. I know that there were races that HMS were just too good at but some of those were never going to happen. Joe Gibbs had better cars at a lot of tracks HMS won at but in the end their equipment just didn’t hold up. Pocono was rained out with Gordon leading and Ryan Newman or Martin Truex Jr or probably Denny Hamlin would have had that race easily. People can’t say HMS has dominated every race this year because bottom line is, they haven’t. Hendrick Motorsports may be portraying a kind of New York Yankee image right now but it doesn’t seem apparent that they will have any type of dominating effect in the 2008 season.

Tips To Avoid Air Bubbles In The First Place

Are 30 Minutes of Circuit Training Enough