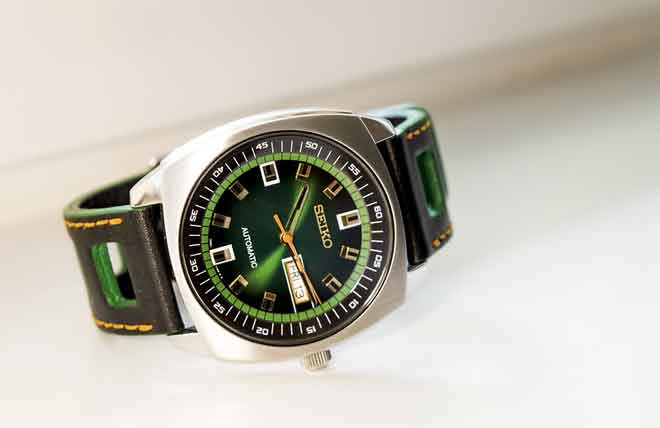 During the Cold War, communist regimes that bordered the west often built facades of modern buildings and faced them towards their free neighbors. The regimes thought they would convince their neighbors that life was cleaner, better, and more wealthy in their communist countries. The problem was that everyone involved knew it was a lie. That’s why I’m troubled by my Merona Tanker-style watch with fake subdials (Model FMDM204). While they look good and real subdials can be difficult to read anyway, these simply don’t work and render that face of the watch a mere facade.

The non-functional subdials make this watch appear to be more luxurious than it really is. On a prestige brand of watch, subdials are called complications and they require extra gears and mechanisms to be incorporated into the design and watch case. They required time, skill, and resources to build into the watch design. The Merona Tanker watch with false complications skips all the extra work of creating functional subdials and just gives you a watch that looks like it has expensive complications. Hence my trepidation regarding this watch. It just seems a little inauthentic.

The watch itself is perfectly capable of telling time and being comfortable. This Merona watch has a square face and measures 30 millimeters by 40 millimeters and is 10 millimeters thick. The FMD quartz movement is perfectly reliable and made in Japan. The leather band is quite comfortable. The case back is stainless steel and the bezel (or case) is made of a base metal. I just keep coming back to those false complications. They bug me, get more.

Of course, I don’t really go diving with my diver-style watch and I don’t compete in triathlons while wearing my Timex Ironman watch. I also don’t go hunting with my Casio Hunting Timer watch. I don’t even cover a measured mile at 400 miles per hour while wearing my chronometer-style watches. But, the difference is that with some of those more authentically designed watches I could embark on those adventures if I really wanted to go for it.

Really, the Merona Tanker-style watch with false complications poses an interesting question for consumers like you. Merona isn’t the only maker of inexpensive watches with non-functional subdials. Where do you draw the line between functionality and design? Do you mind non-functional or even false design features on a man’s watch? Skipping the complications, allows Merona to sell this comfortable watch for a very low price (less than $15). But, are you willing to pay that price? If not, you can always try the Merona Tanker-style wristwatch without subdials. It looks great without the guilt.

How to Connect wifi Booster to Wireless Computer?