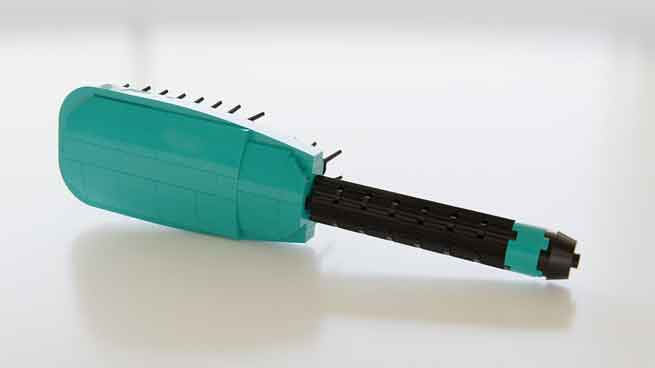 I remember in the late 80’s the first pop up brush hit the shelves and if you did not own one, you were not cool.

I also remember these stupid pop up brushes folding up when you were in the middle of brushing your hair. The brush would fold in on you and end up tangling itself into your hair. The result was a giant painful knot; but so long as you had your pop up brush, and people saw you brushing with it, you were cool man cool.

Plus the brush came with a built in mini mirror. How cool!

Yeah it was cool, but hot damn, the pop up brush totally sucked when it came to actually brushing your hair.

The pop up hair brush never went away though. It planted itself on shelves in stores nation wide…as years passed the pop up brush remained, but the design somewhat changed, and the brush still managed to sell.

The latest pop up brush I have seen is the Body Benefits Pop-Up Hairbrush with Mirror, click this site.

This little dudder pops into itself and folds down into a small pocket sized compact. Now just when I thought the original pop up brushes sucked this one came along and took the cake. It wins in the suckiest sucky pop brush contest.

This sucker is so difficult to use that you end up just throwing it against a wall.

The circle shape is what killed this hunk of crap.
Its small body and stupid circular shape makes it impossible to hold and brush at the same time. The brush constantly folds into itself as you are brushing. The result like the original pop up brush, is you working on trying to remove it from your hair after it tangles up into a ball.

The handle you hold also holds a mirror, so of course the mirror always sports finger prints. Heck, at least the original pop up brush placed the mirror in an area where it would stay clean!

The bristles to the Body Benefits Pop-Up Hairbrush with Mirror are squishy plastic bristles with small plastic beads on the tips. These beads are always fun to pick off when you are bored. However the bristles are so squishy, and so lacking that it barely brushes hair. It’s like a Barbie brush designed for humans. It’s ridiculous!

Nope. This is probably the worst designed brush you will ever encounter. They sucked in the 80’s, and somehow, some designer managed to bring them back and designed them to suck worse than they originally did.

The Body Benefits Pop-Up Hairbrush with Mirror just sucks! There is no other way to put it. It’s a knot making machine that fits in your pocket.

Two thumbs down, and a loud BOOOOO hisses from the crowd.

Where to find it:

You don’t want to find it. You truly don’t. But if you are looking to avoid it, it can be found down the hair care sections of CVS, and Eckereds. The price will come to about $3.00. However, I wouldn’t take it if it were free.

How To Sharpen Nail Clipper

How to Measure Eyebrows for Microblading?

How to Rock a Sleeveless Top at Work