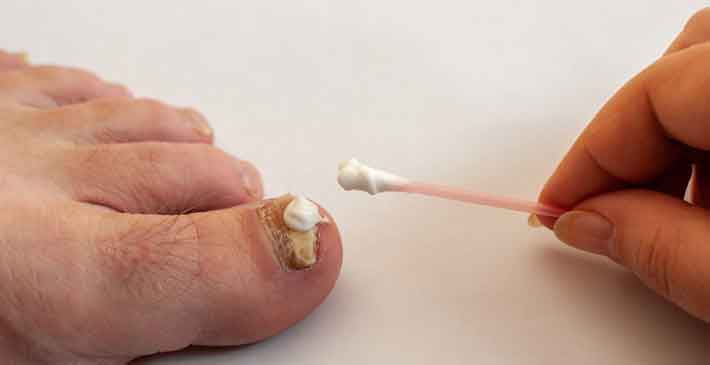 Nearly everyone over 40 will at some time suffer through the problem of toenail fungus. You can try over-the-counter treatments that promise a cure and costly prescription drugs you have to get through a doctor. I will tell you about a fungus treatment that works for me that is cheap and easy.

Toenail fungus grows under your nail in the skin near the nail base, so no amount of digging out the excess buildup of dead fungus from under the nail will get rid of it. This material is mainly dead fungus bodies, their wastes, and fungal spores. These spores are how the fungus spreads, and it will spread to your other toes and to other people. It is not just ugly, but as the material under the nail builds up it will raise the nail up and cause it to get painful. It will get bad enough that wearing shoes will hurt and your walking will be affected as you try to keep pressure off the nail.

When my toe got so painful that I had to wear open toed shoes, I went to the  foot doctor to ask about treatments. I had already tried every over-the-counter toe nail fungus treatment I could find without any luck. I wanted to ask about those prescription drugs for toenail fungus and get his opinion of them, Get more info. He told me that they would work, but would cost thousands of dollars and have to be used for over a year. A side effect might be liver damage and while taking them I would have to have blood tests done repeatedly to check on my liver. All of this would greatly increase the cost to me.

My doctor then told me another way to both cure and prevent toenail fungus. Vinegar is what he told me to use. It’s cheap, safe, and easy to use. He told me to rub vinegar three times a day, everyday, on the base of my nail. Not under the nail, but on the skin where the nail grows out of the toe, and to be sure, to also do this any  time I got the toe wet. He said it would take a year or so before the toe would be healed, because it takes that long for a new toenail to grow out. Once the toe is healed, to keep the fungus away, I would need to still use the vinegar but only a couple time a week or so.

I followed his advice and after using the vinegar for about two weeks started seeing new healthy pink nail growing in at the base of the nail. After some 5 months the bottom half of the nail was pink and clear and just before a year was up the whole toe nail was healthy. I had to use the vinegar three times a day for the first 6 months and then I cut back to twice a day. Now that my nail is healthy I use it once a week on all my nails. I keep a small eye-dropper type bottle of it near my bed and rub it in to my nail beds and around my toes really well. When you first start your skin will peel away from around the nail  like a with a sunburn, that is because the fungus is living all in that skin and when you kill the fungus the skin it has killed will peel off. I have been fungus free for 5 years now and all it has cost is the price of a little vinegar and my time.

What Is A Safe Rate Of Weight Loss On A Long Term Basis For Most Overweight People?

How to Properly Clean a Toothbrush

A New Way to Diagnose Diabetes?: Hemoglobin A1C Levels Could Soon Be Used